Why does my ferret lick me?

Have you ever been licked by a ferret?

It’s not as gross as it sounds. Ferrets lick because they are grooming themselves and other ferrets, or to show affection.

Ferrets, like many animals, lick and there are several reasons that they do. Licking is a form of grooming so your ferret might be giving you a wash. Or, you may just taste nice and he’s enjoying it or, as is common with ferrets, he could be getting ready to bite you.

Licking could be his way of washing you

Almost every animal grooms itself and others. Even humans do it although they tend to use things such as hairdryers and brushes instead of tongues.

Just as a dog licks, so too will your ferret. He will groom himself and probably the other ferrets ( and animals ) that he lives with and, if he gets the chance that means humans too.

Grooming is a perfectly natural activity for ferrets, it helps them to stay clean, remove parasites and other ‘passengers’, helps them to check for injuries and is a regular activity that he will undertake.

If your ferret licks you a lot then it’s possible that he’s simply cleaning you up.

He’s licking because you taste good

If you haven’t had a wash for a while or you’ve been exercising, then your skin might have a salty taste and odour.

Just like the bad guys in a Dirty Harry movie, you’ll be a salty dude.

This smell and taste will be attractive to your ferret ( and dog and cat if you have them ) and he’ll enjoy the feast and treat that is your dirty, sweaty skin.

Sometimes there’s no reason for licking other than that of it tastes nice.

Licking can be a prelude to a bite

It has been known for ferrets to lick and then bite their owners.

Although this is not fully understood it is believed that the ferret is trying to communicate by licking and, when he doesn’t get a response he resorts to less tactful measures – biting. 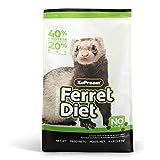 As many ferret owners suspect, your ferret may be licking as a sign of affection, it could be simply that he is pleased to see you.

He could be stressed or anxious

Many dogs will lick excessively if they become anxious and the same could be true of your ferret.

For some animals the act of licking releases calming endorphins which help the animal to relax.

If his licking behavior is getting out of hand then it would be wise to speak to your vet for professional advice and support.

You can also reflect and consider:

Have there been any changes that could have affected your ferret – such as house move, new family member etc?

Have you changed your ferret’s food or routine recently?

Has the ferret been unwell?

Changes to an animal’s routine can be disturbing for many pets, they simply don’t understand when things appear abnormal and, for some, licking can be a way of communicating this stress.

To an owner it can seem strange and bizarre to have a ferret licking you, especially when it’s done very frequently.

There are many reasons why your ferret might be licking and if in doubt speak to your vet for professional advice.

Licking may not seem important but the behavior could indicate that something is wrong so don’t ignore it.

In most cases, however, it is simply normal ferret behavior, but if you are concerned then your vet is the best qualified person to talk to for advice.

Are rats a good pet?